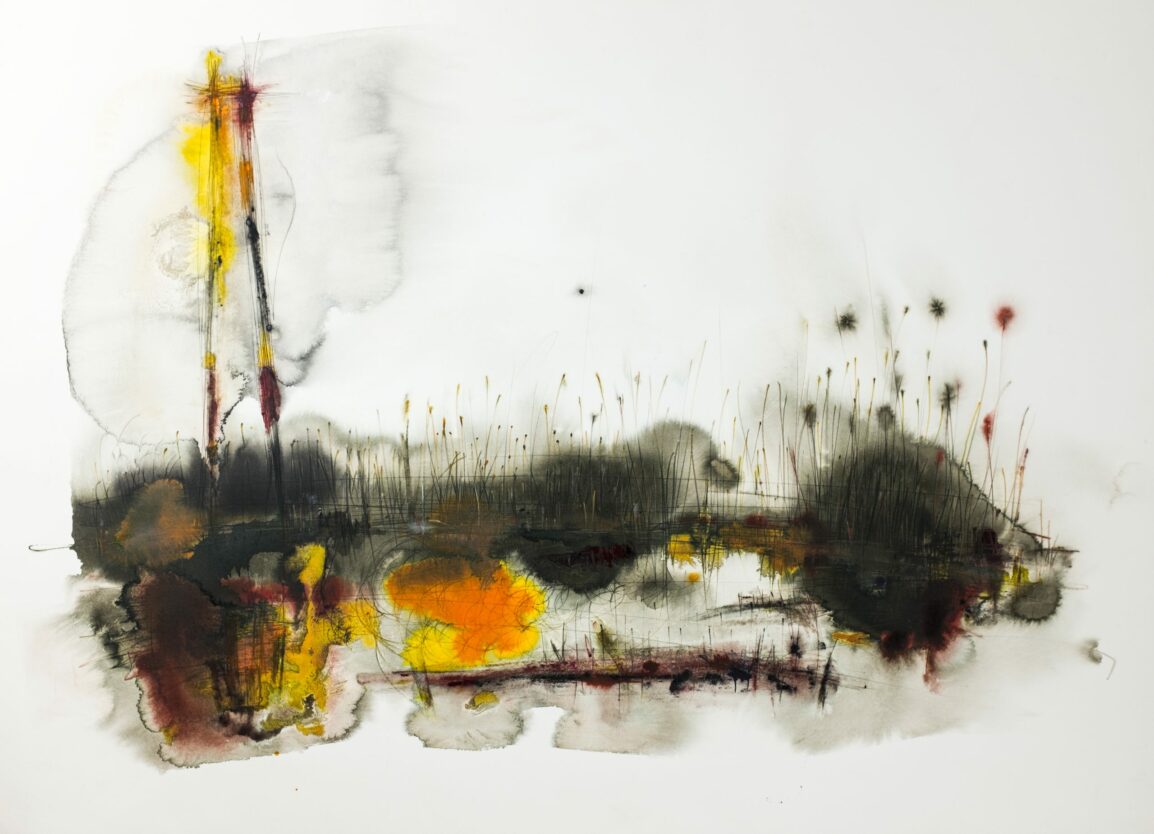 ‘Nothing to Look Forward To But The Past’. The best is behind us; there is no future to look forward to; there is no future at all; all we have left is the haunting of nostalgia… These contemporary nightmares are the likely first readings of this title which no doubt, at least initially, seems fatalistic, tinged with doom, and an inverted image of the trajectories in which we have tended to seek meaning, an uncanny inversion that feels, as of recent, all too familiar.

This year’s Covid-19 crisis, perceived threats to freedoms, of economic downturn and environmental extinction have, for many, bubbled such underlying anxieties into potent fears. Until recently, we have been living in the age of the aspirational, the bucket-list, wherein so much of the world and its opportunities are visible, appearing, for many, so within reach. But now, more than ever, perhaps, we may feel we are looking toward nothing and longing for the past.

The logic of individualism is linear, echoing and echoed by the logic of industrial and technological development. We often treat other logics, such as the cycling logics of ritual, imagination and nature, with some suspicion, somewhat unreal. Our linearity, however, doesn’t point in one direction. It is created not only by driving forward, but by constant tracing back and forth. Our present is never stable, ‘pure’, but oscillating and synthetic.

Indeed, human beings are distinguishable from most of the rest of ‘nature’ (set apart, and often against) by our capacity to contemplate the future. But also, vitally, by our relationship with the past. We are the creatures whose collective history is recorded deliberately and materially outside of the body, who can bracket the past, its trace, from the lived present, hold it in our hands and feel pastness. We are definitively haunted, and this haunting is textured, embodied and manifested by the things of our environment, protected from or abandoned to our own forgetting and mortality, as to ruining tides of weather, decomposition, loss of definition and burial under other things.

Even digital life cannot eradicate our orientation by touch as our bodies apprehend the ghosts of the physical and virtual, resisting and longing, fearing and loving, feeling and moving. We are creatures of past-and-future, of, it might be said, the photographic. This is our architecture, our editorial signature and our dwelling place. As such, our relationship with the shared currents of the natural world is ambiguous. We may be drawn both into or away from its cycles of collectivity, burgeoning and erasure.

Biological, architectural, ecological, literary, familial, sociopolitical, technological, archival and psychological pasts/futures are at stake in the commissions and artwork gathered in this publication, pasts and futures of our bodies, our homes, our objects and communities. Looking forward to the past is something we have always done and will continue to do, whether we recognise it or not. It is how we orientate, it is our humanity.

Though these times are frantic with fear of nothings looming ahead, of loss, extinction and oblivion, beneath the surface ‘nothing to look forward to but the past’ is no mere negation of hope. It is a statement that echoes the strange twists of human time, the knotting of past, future and present in which we are all, together, entangled. When our ambition and forward thinking and very confidence in the logic of life as we know it has been stifled, it may be the time to explore the manythings that looking forward to the past can mean for our present, and consider whether hope can move in different directions.

Once Upon a Time, (in 2012), Abridged’s Gregory McCartney was invited to curate a festival in Galway by TULCA, a visual arts organisation in the city. He was delighted, his delight being closely flowed by terror. He’d never curated an entire festival before and had been in Galway exactly once (strangely enough as an artist in TULCA 2008 curated by George Bolster) so he was worried he would be more than a bit out of his depth. He also was concerned that his particularly aesthetic and philosophical sensibility (which is very Northern and very Abridged) would be alien to local audiences. At any rate he dove right in and gave the festival one of the most Abridged titles ever: ‘What Became of The People We Used To Be?’ taken from the theme of an iconic 1970s TV series ‘What Ever Happened To The Likely Lads?’ which documented the mainly failed and failing hopes and dreams of two northern English likely lads.

The concept behind the festival was essentially a question – how did we get here? – and what happened to our hopes, our ambitions, our dreams? The curator wasn’t looking for answers per se but rather wanted to survey the state we’re in from an Abridged perspective, leaving it to the audiences to find their own paths into and out of the world that was presented to them. At any rate, the festival seemed to be popular and the curator had a wonderful time. Though he has to apologise for all the pain he put the great people organising the festival through!

So, when he was asked last year to take part once again in TULCA, he was once again delighted to. It seemed logical to revisit the same territory, so he, for the third time (there was a show with the moniker ‘Tomorrow’s Almost Over’ in Void, Derry, in 2013) revisited the Likely Lads theme tune for a title.  In Nothing To Look Forward To But The Past, the curator continues with the Abridged themes that lay behind Tulca 2012 exploring concepts of ‘journey’ and ‘journeying’ in an evolutionary/environmental context that considers both its micro and macro contextualities. And asks the question: Is there really anywhere to go?

The online exhibition/publication explores through abstraction and metaphor the fragility of our times, our society and indeed ourselves.  We are not separate from nature. We cannot theme-park it and hope it behaves itself. We cannot make it human. The wolves are always at the door. The Earth isn’t a mother. Or a she. It doesn’t care. If we aren’t careful it will devour us. We are the only species that has the capability for self-destruction. We are the only species that would build a Doomsday Clock. We are the only species that would want to. As the social, economic and actual environment is in the process of being destroyed we are carried on a journey to God knows where and yet we turn to those that would deny the existence of any sort of crises to save us, or if not to save us, to offer us the opportunity for one long last scream.

The Covid – 19 pandemic reinforced and changed the nature not only of the project but of everything. More artists, essayists and poets were added and the scope was widened out to also investigate our relationship with both our concepts of history and the here and now. This is a time for mythmaking and for history as myth instead of fact. We can see the rise of the conspiracy theorists and their offer of alternate realities that seek to muddy the waters so much that facts are no longer recognisable and who offer the past as a golden age now destroyed. These are dangerous times. And people are asking themselves: ‘What Became Of The People We Used To Be?’ Their conclusions, these days, are always frightening.

Thanks to TULCA for the invite to participate in the project and to Galway2020 and the Arts Council of Northern Ireland for their support. Thanks go to all the participating artists, essayists and poets. And to Susanna Galbraith of Abridged. Appreciation goes to Verbal for their valued support of Abridged. Featured Image by Stuart Cairns.

The print edition of Nothing To Look Forward To From The Past, edited by Susanna Galbraith is available from Abridged on request for the price of postage. Email abridged@ymail.com.

We’d be grateful if you could take the Galway 2020 audience e-survey:

Thanks to our Funders: